We’d love to learn more about you and your event or trip. Fill out our fast, no commitment form to get started!

Books in Our Bag Need some great book recs? Here are a list of our favorites from this season. Share your recent reads in the comments to continue the conversation with other nomadic bookworms!

The Beach by Alex Garland Richard is backpacking through Thailand and ends up on a quest to discover an Eden-esque island. He soon discovers how difficult it is to maintain this utopian dream life. It’s thrilling and can be somewhat relatable; hard not to imagine yourself in his shoes while you are also island hopping through South Asian waters. You might recognize this title if you’ve seen the film adaptation starring Leonardo DiCaprio. (Hint: The book is better!) Buy The Beach by Alex Garland on Amazon by clicking this photo link!

Highly recommend! You would enjoy this book if you liked : Lord of The Flies by William Golding Mary Beard is a renowned English scholar and total badass. She is currently a professor at Cambridge University but is most famous for being her blunt, brilliant, unapologetically authentic self. Her latest book, Women & Power: A Manifesto, is a series of essays discussing the history of silencing women. In this book, Beard traces the birth of misogyny to it’s ancient roots, showing that as far back as Homer’s Odyssey women have been publicly silenced and removed from discussion, because even the mere act of speaking was for the boys. She brings awareness to these parallels and highlights the power in women who resist and use their voices.
A great, quick read. You would enjoy this book if you liked : Men Explain Things To Me by Rebecca Solnit Scar Tissue is the autobiography of Red Hot Chili Peppers front man, Anthony Kiedis. This honest and rollercoaster of a memoir touches on everything from the birth of the friendship between Kiedis and RHCP bassist, Flea, to Anthony’s first experience with drugs (he was 5) and sex (12). The storyline takes you through every impressionist moment in his life, which at times feels like it collapses while simultaneously coming together. Whether he is recalling his battle with drug addiction, his sexual and romantic escapades with women worldwide, or his meeting with the Dalai Lama, this compelling walk down memory lane with one of the world’s most famous rockstars will leave you spinning his records and understanding his lyrics and music in a new light. Click the photo link to purchase on Amazon.
An awesome perspective and story. You would enjoy this book if you liked : Heavier Than Heaven: A Biography of Kurt Cobain by Charles R. Cross

No One Belongs Here More Than You by Miranda July If you’ve never heard of Miranda July before… you’re welcome! Miranda is a screenwriter, director, author, and performance artist based in California. She is hilariously strange, extraordinary talented, and one of a kind. This collection of 16 short stories is just straight up good. Her characters are all unique, yet embody a common trait of loneliness and isolation. They’re constantly living in fantasy, while remaining unable to escape their reality; whatever situation that may be. From young best friends who escape their small town to live large in the big city, to an older man who gets tricked into a romantic relationship with a friend when he was lead to believe he was being introduced to such friend’s younger sister, these collection of stories hops around in demographic yet stays true to the obscure nature of July’s fantasy worlds and humor. Click the photo link to purchase on Amazon.
Recommended beach read! You would enjoy this book if you liked: Self Help by Lorrie Moore

Kafka On The Shore by Haruki Murakami 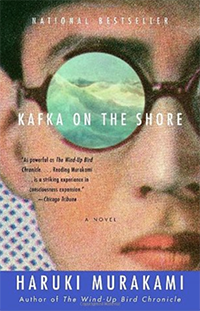 This 2002 novel by Japanese author Haruki Murakami made the “Top 10 Books of 2005” (the year the English version was published) from the New York Times. Kafka is a teenage boy on the run, and comes across Nakata, who is drawn to Kafka for reasons that cannot be explained. As their paths continue to meet and retract, Murakami keeps it weird and pays homage to Franz Kafka with talking animals, raining fish, spirits, and more.
This storyline becomes one interesting and unexpected story.
A nice break-up between the typical storyline. Murakami is inventive and contemporary in this fictional Japanese fantasy. You would enjoy this book if you liked: Demian: The Story of a Youth by Herman Hesse